The next step in your Pokémon journey starts here

Take your Pokémon journey to the Kanto region with your partner Pikachu or Eevee to become a top Pokémon Trainer as you battle other trainers. Use a throwing motion to catch Pokémon in the wild with either one Joy-Con controller or Poké Ball Plus accessory, which will light up, vibrate, and make sounds to bring your adventure to life. Share your adventure with family or friends in 2-player action on one system using a second Joy-Con or Poké Ball Plus (sold separately). You can even connect to the Pokémon Go app* using a compatible smartphone to bring over Pokémon originally discovered in the Kanto region! Explore the diverse and vibrant region of Kanto! True-to-size wild Pokémon roam around in the game, so catch them like a real Pokémon Trainer by using motion, timing, and a well-placed Poké Ball. Go on a stroll with your favorite Pokémon in your Poké Ball Plus! Connect your game directly to Pokémon Go to receive Kanto region Pokémon.

You and your partner Pokémon

In Pokémon: Let’s Go, Eevee! you are always assisted by your partner Eevee, who develops along the way and learns new actions. For example, he can learn secret techniques that you can use outside of combat, such as Chop Down, Sky Dash and Sea Skim, as well as partner powers to use in combat! The more time you spend with your partner, the stronger your bond will become! You can pet, feed, tickle, and dress up your partner Pokémon with a variety of costumes, accessories, and hairstyles. As your bond gets stronger, great things can happen.

During your trek through Kanto, you will encounter lots of Pokémon! Just bump into one of those Pokémon if you want to try to catch it. Use the Joy-Con’s motion controls or the Poké Ball Plus accessory (sold separately) to throw a Poké Ball !

Be carefull! When a trainer sees you, it’s time for a fight! Combat is a great way to train your Pokémon and strengthen your bond. Pokémon Gyms are places where Pokémon Trainers can put their combat skills to the test. When you defeat a Gym Leader, you will be awarded a Gym Badge.

Kanto is rich in variety and filled with villages, cities, mountains, rivers, forests and seas. There are plenty of places to explore and many Pokémon to find. You can even ride some Pokémon, which can help you move around the world faster. A great way to share your adventures with your Pokémon!

As you travel through Kanto, you will inevitably cross paths with the sinister organization Team Rocket. This evil group wants to steal Pokémon to use for their own dark purposes!

Some Pokémon have traveled to Kanto from Alola. Due to the unique climate in Alola, they look a bit different from their counterparts in Kanto!

Give a Joy-Con to a friend for multiplayer fun! The Support Play feature allows two players to explore, battle and catch Pokémon together. Both players can also have a Pokémon travel with them!

Play Pokémon anytime, anywhere, with anyone! 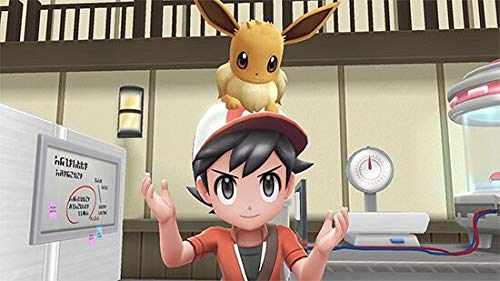