The Iconic Purple Dragon is Fully Remastered, All Scaled Up and Just in Time to Celebrate His 20th Anniversary! Spyro has been unleashed! He’s all scaled up and ready to flare up some bad guys in Spyro™ Reignited Trilogy, a dynamic gaming collection that’s going to have fans “Spyro-ing” out of control. In Spyro™ Reignited Trilogy, gliding to new heights, unleashing fire-breathing attacks, and exploring lush environments is more fun in HD graphical glory. Spyro™ Reignited Trilogy introduces players to a fully remastered game collection of the three original Spyro™ games that started the phenomenon: Spyro™ the Dragon, Spyro™ 2: Ripto’s Rage! and Spyro™: Year of the Dragon. Remade from the ground up by lead developer Toys for Bob, the Spyro Reignited Trilogy features the fun and nostalgic gameplay that fans remember with more than 100 levels, enhanced reward sequences, Spyro’s gang of zany dragons and other goofballs (including Sparx the Dragonfly, Hunter, Sheila, Agent 9 and Sgt. Byrd) and more. The trilogy also includes improved environments, updated controls, brand-new lighting and recreated cinematics for added flavour in this one-of-a-kind adventure. Spyro Reignited Trilogy is an awesome gaming experience that builds on the excellence of the first three games. Each level in Spyro Reignited Trilogy is mapped faithfully from the originals. The characters are creatively re-imagined with additional flair allowing fans to rekindle the fire with Spyro and his crew like never-before. Players will experience a trilogy that’s loaded with an astonishing amount of detail, refreshed modern day mechanics, full analog stick support and smooth camera handling. Spyro Reignited Trilogy also re-imagines Stewart Copeland’s original soundtrack from the first three games. Paying homage to fans, Tom Kenny, the original voice actor in Spyro 2: Ripto’s Rage!, and Spyro: Year of the Dragon, has returned as the voice of Spyro in the trilogy Spyro Reignited Trilogy. Spyro Reignited Trilogy includes: Spyro the Dragon: Gnasty Gnorc has returned from exile and has unleashed evil magic on the Dragon Realms, trapping the Dragons in crystal and raising an army of Gnorcs. Spyro, with his friend Sparx the Dragonfly, is the only Dragon left who can traverse the six Homeworlds, free the Dragons and save the day. Guide Spyro as he glides through the Dragon Realms, toasting colorful enemies with his fiery breath and encountering countless puzzles and adventures along the way. Spyro 2: Ripto’s Rage! Spyro has been brought to the land of Avalar to defeat the evil sorcerer Ripto who has brought war to Avalar’s Homeworlds. Each Homeworld is being held captive by Ripto and his minions, and it’s up to Spyro to defeat them and bring peace to Avalar’s realms. In this adventure, Spyro powerflames, supershots and headbashes his way through enemies while completing unique challenges such as herding strange beasts, target shooting and defeating ravenous dinosaurs. Spyro: Year of the Dragon The Dragon Realms are celebrating the ‘Year of the Dragon’ when a mysterious cloaked figure emerges to steal all the Dragon Eggs. Under the spell of the evil Sorceress, an army of Rhynocs is now guarding the helpless eggs in the Forgotten Realms. With new and old friends, Spyro is on a quest to recover the lost eggs, defeat the Rhynoc army and stop the evil Sorceress. Turn up the heat in this adventure by exploring the mysterious realms and completing outrageous challenges, such as pulling off sick tricks on a skateboard and stepping into a boxing ring. 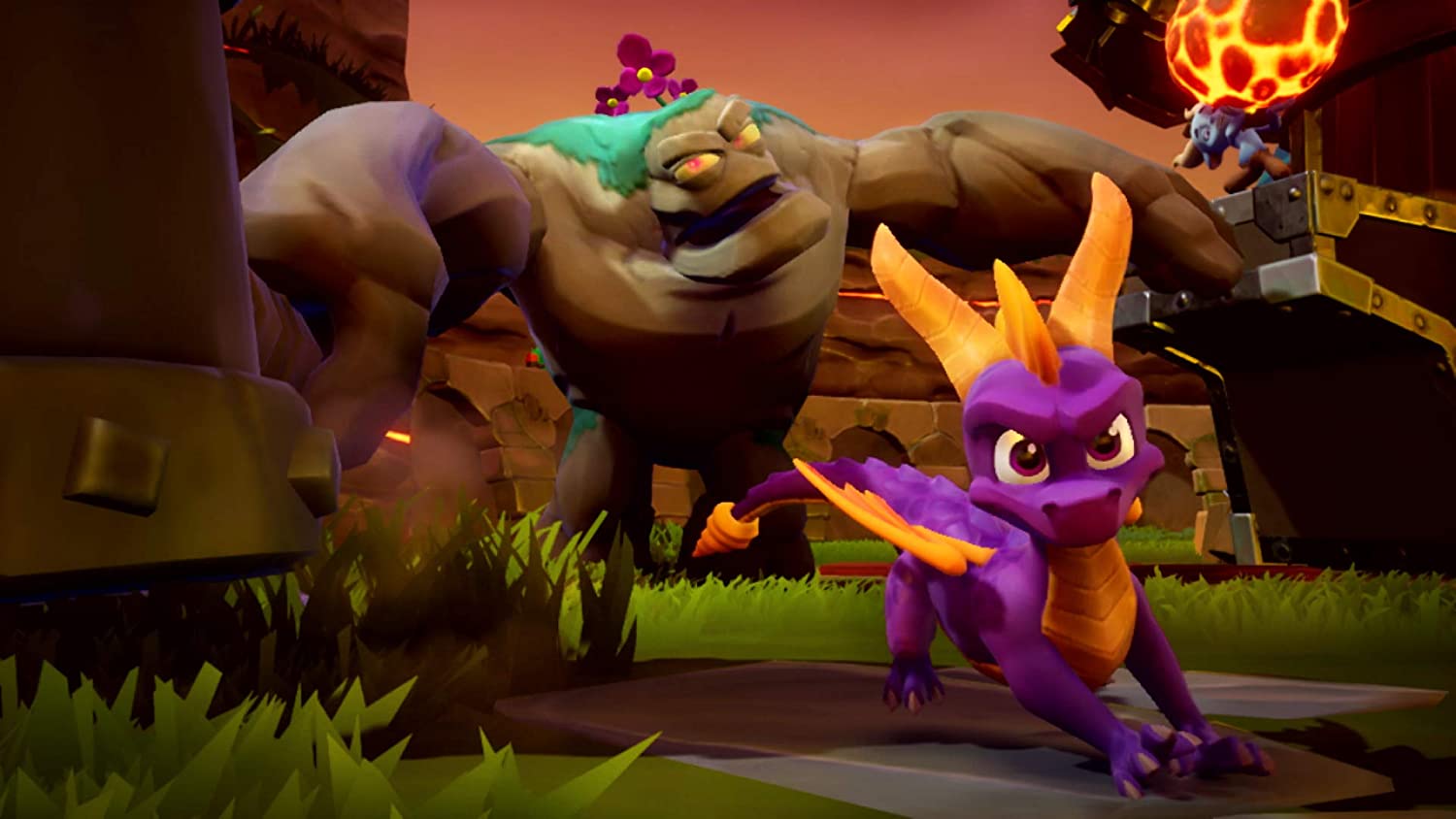