POWERED UP AND REBORN!

Unique new Mirages will also appear, including characters from previous FINAL FANTASY games. GO FISHING WITH NOCTIS! Experience a new mini-game where you can go fishing with FINAL FANTASY XV hero Noctis. The mini-game also features its own background music. 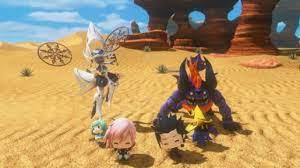