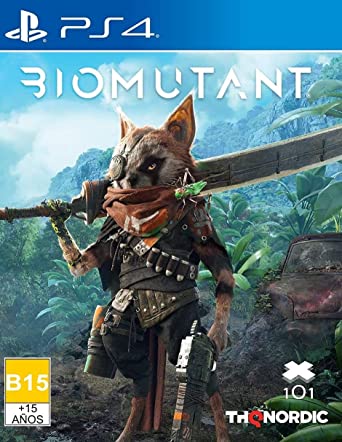 
The Tree of Life is dying, and the pollution is spreading all over the world, corrupting and twisting life coming in contact with it. In a landscape ruled by six factions, it falls to a single determined warrior to be the saviour and uniter or the agent of destruction and conquest. Biomutant is a third-person open-world action-RPG set in post-apocalypse world inhabited by sentient anthropomorphic animals.

Biomutant is described by the developers as an open-world post-apocalyptic kung-fu fable. The protagonist is a warrior finding him- or herself in the midst of a crisis which at its conclusion will define the fate of the world. Experience the story by interacting with key characters in the game’s expansive regions and cooperating with them to further their and your own goals in a reactive way. Make moral decisions aligned with the Yin and Yang-based philosophies express and embodied by the game’s six factions and decide the fate of the Tree of Life, ensuring its eventual death, or saving it from destruction. Find out why your character is so central to the conflict, and who the wolf-figure is.

Biomutant gameplay flow takes notice of your character’s appearance. Create a slender, small character and find that you’re much faster and more agile, but if you want to hit harder and take hits better yourself, you would want to end up with a stockier version of your furry rodent avatar. Beyond character creation you can encounter areas which encourage mutations in your avatar. Camouflage, transformed limbs and other physical mutations coming from polluted areas, psionic abilities gained in radioactive zones, even bionic enhancements if you convince a tinker to make them for you. Every change is easily visible on your character, grounding the mechanics in the visuals.

Biomutant takes place in a world where the ruins of previous civilisation are overgrown with plant life and populated by peculiar creatures, some resembling animals known on Earth, others much more fanciful. The protagonist can learn the Wushu martial art styles from roaming masters and employ Ki-attacks and then travel a robotic hand. Flashy swords meet with spontaneous mutations caused by industrial waste and the sound of firearms punctuates the martial arts battles.

The world of Biomutant is large, and holds many secrets and rewards for an inquisitive player. Your means of transportation as creative and drawing from multiple sources as the setting itself. Before long you’ll find yourself crossing the lakes on a jet ski, admiring the world from above thanks to a hot air balloon, or even riding along in a mech, perfectly suited for visiting highly contaminated areas. Nothing, however, beats a seemingly severed mechanical hand with a cannon in one of its fingers.
Template is not defined.
Template is not defined.