Battle Chasers: Nightwar is an RPG inspired by the classic console greats, featuring deep dungeon diving, turn-based combat presented in a classic JRPG format, and a rich story driven by exploration of the world.

Collect rare ingredients to make the best gear available, using crafting stations found deep inside dungeons. Need five Coast Iron Bars, but only have four? Try crafting the item anyway, at a 80% success chance – at the risk of losing all the ingredients put in. Or craft the item with 10 bars instead of 5, with a chance to make an epic version of the item.

The enigma of the Lost Isles means no two dungeons are alike. Rooms move, yes. But so do monsters, traps, treasure, secrets, rare vendors, shrines, NPCs, puzzle elements and resources. Return to a dungeon after successfully surviving once, and the option to change the difficulty is unlocked. This increases the difficulty as well as the reward…and the chance for rare artifacts and NPCs to appear. Key Features: 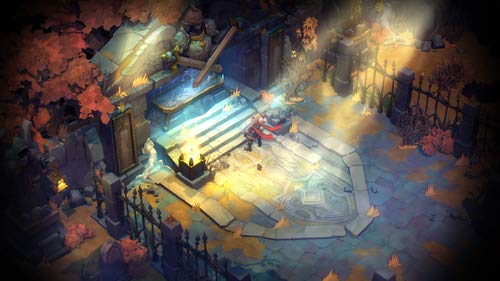